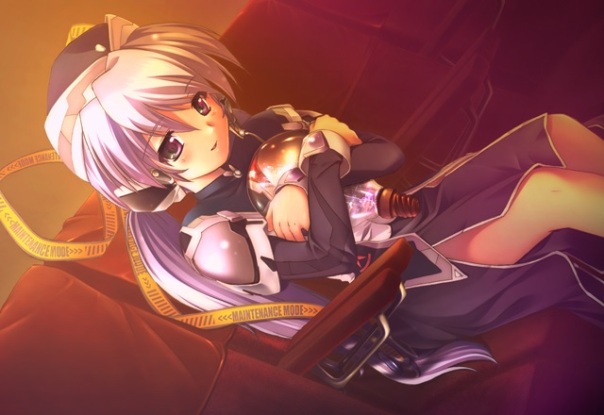 My fifth completed visual novel was another one by Key. This time a rather short kinetic visual novel, Planetarian: Chiisana Hoshi no Yume (Planetarian: Dream of a Little Star).

For many years that I watched anime, read manga or even played visual novels, Planetarian managed to hide from my view. Even when I found it once in a while in the databases, I didn’t give it much thought. I wasn’t interested in playing kinetic visual novels, because they had no choices. That was until I changed my opinion on reading. As soon as I discovered the magic of literature, Planetarian once again caught my eye, and the future was set. I was going to read it.

Fast-forward a few months, and here I am (now a few weeks after finishing it, already). I read Planetarian in 4 days (although it’s a 1-2 day read) and am satisfied. Partly because I am one step closer to completing all works by my favourite studio, but of course that’s not the main reason. Planetarian is great on its own.

Since Planetarian is a short visual novel, it does not have time for extensive world-building. Nevertheless, there is solid character development, and the way story is told is captivating. I really felt like being part of the eerie post-apocalyptic world with its tragedies and sadness. I felt bad for the characters and wanted to do something to help them – that’s how much impact the “game” had on me.

The story is told from the perspective of an unnamed middle-aged man. He’s one of the few humans left on Earth after a big war. Cities have been destroyed, and it’s now raining all day, every day. The sky is always grey, and hence no stars can ever be seen. They’ve become a myth in this world without hope. Except one place. The planetarium.

On his mission to find useful supplies in an abandoned city, the main character got into a kill-or-be-killed fight with three other “junkers”. He won and managed to infiltrate the city despite the guarding mechas. His hopes were crushed, though, when he didn’t find anything he could salvage. Just one robot. The robot, calling itself (herself?) Hoshino Yumemi, was responsible for the planetarium on the roof of a department store. Doing her job like she should, even 30 years after all residents or possible visitors disappeared, Yumemi invited our protagonist to view the stars.

Main character, who I’ll call Junker from now on, was at first reluctant to do what the robot proposed, or even talk to it. In his eyes, Yumemi was just a broken robot, who should have been turned off decades ago. Yet, she was still here, patiently waiting for the day that would never come – when customers would once again come to visit the planetarium. She was all alone, but did not despair. Her databases said that on rainy days there were more visitors, and she practiced her welcome speech every day. How was she even working after 30 years? When all robots were turned off, something happened to the electric supply of the city, and the planetarium began receiving a very small amount of power. Just enough to power Yumemi for 168 hours a year.

By fate, Junker arrived on exactly such occasion. He was cold-hearted, calculating and bitter. Of course he had a reason for that – his whole life had been a struggle to survive, and he hadn’t known happiness besides alcohol and tobacco. Still, it took Yumemi less than a week to completely change his heart. As he rested at the planetarium, Junker finally gave in to the clingy robot, and promised to fix “Miss Jena”, a projector device. After a few days of work, the job was done, and Hoshino Yumemi could finally show the commemorative presentation to Junker. Everything went well and the main character had a change of heart when seeing the stars, until Miss Jena turned off again. This time forever. The small current that was powering the planetarium couldn’t handle the load and was cut off. This also meant the end for Yumemi. Once she went to sleep again, she would never wake up. Junker, who couldn’t just leave her there anymore, decided to leave the city with the robot.

After hours of walking, the pair finally reached the quarantine wall. They were one step away from escaping, when they met another broken robot. The remnant of the war. A single mecha stood at the wall, waiting for any trespassers to blow them into pieces. With no other choice, Junker used his last bullets to destroy the machine. He almost died, but still emerged victorious. But he paid a price – Yumemi protected him at the cost of her lower body. She was no longer able to move or even remain turned on. Her artificial life was about to end when she finally revealed what was broken about her. Even though the databases said customers would come, Yumemi felt that it wasn’t true. She was sad, and mistook that for a bug. The everlasting rain fell on her eyes, and it appeared like she was crying while showing Junker the recordings of the last days when people visited the planetarium. It was a really sad moment. When the time finally arrived and Hoshino Yumemi ceased to existing, Junker took her memory card with the hope that he could one day put it into another body, so his first truly close companion could return.

Planetarian is a really touching story. I did not cry, but it still managed to have a strong impact on me. I could emphasize with the characters, and the game had a good message – we should try our best to prevent the events of the game from occurring in the real world. We need to work together to achieve our goals, and only the can we reach the stars. If we fight, not only will we lose the means of reaching the stars, but those dreams will disappear from sight, covered by grey clouds and the harsh routine (the rain). Do I recommend playing this “game”? Yes! Definitely! It might not be revolutionary, but it is a good short read. You won’t regret it.