I’ll be honest – I have no idea what I just read. The Moon route should have explained many things, but I finished it being even more confused.

What is the route like? Unlike the character route, Moon is a relaxing route, with a philosophical feel to it. It concentrates mainly on the relationship between Kotarou and Kagari, and explains certain characters’ behaviour and phenomena.

As soon as the new story begins, Kotarou finds himself in a strange world. He gets there by falling asleep, yet wonders if it really is a dream. However, he can die as many times as he wants there, which is proven by Kagari, who kills him over an over when he tries to talk to her. She is sitting on the ground, looking at the Tree of Life, which is actually a tree map with all possible scenarios of the development of life on Earth.

We now learn that her goal isn’t to destroy the humanity, but to activate the “re-evolution”, which would let Earth live just a bit longer. Despite all efforts, life will still come to an end one day, and Kagari is trying to find a branch where the ending is different. Kotarou falls in love and wants to help the girl on her mission. But as a human, he is incapable of process the tremendous amount of information. He tries rewriting his intelligence many times, but reaches the point of no return, where human emotions seem like a joke, and everything is cold. Luckily, Kagari brings him back.

Throughout the route Kotarou talks about a bunch of environmental stuff, physics and pseudo-science. In general it was a huge info-dump. I’m really not sure if that is a good idea for an entertaining visual novel to suddenly start teaching people science. If you get through it, though, you’ll find that the second part of the Moon route is more entertaining.

As Kagari reaches 98% of her mission, strange familiars start appearing. Their goal is to attack and kill Kagari before she finds a possibility for life to continue existing. Who is the villain behind such an act? None other than Kashima Sakura. That’s right, the old lady who is on the verge of dying is the main villain of the story, and hates humanity so much that she wants to destroy even the possibility of the Salvation saving life. Millions of years pass in the dream world, and Kagari fails to find that possibility. Only after Kotarou writes an irrelevant comment on the tree map about wanting to meet again, Kagari suddenly realizes something and creates a branch that goes past the previous limit of life – right into the endless unknown. It’s time to execute the plan and Kagari turns into a bud.

Things won’t go that well though, as Kashima Sakura intends to stop her. She sends hundreds of strong familiars. How does she even know about the dream world which is supposed to exist outside matter and time? Supposedly it was just a random obsession she got when she became crazy. And surprisingly it turned out to be true. Now she must be stopped, and for that task Kotarou materializes the Occult Club: Kotori, Chihaya, Shizuru, Lucia, Akane. He adds to that Yoshino and his gang. He even creates a clone of Sakuya (weighing 100 kg and unable to speak) and two mammoths that are weaker than Chibimoth. Familiars attack, and one by one the club members disappear, never to meet again. First is Lucia, then Kotori, Akane and Yoshino. After Yoshino’s last words, Kotarou realizes the reason the guy acted so cold towards him – because Kotarou never thanked his classmates for helping him.

Finally come the disappearances of Shizuru and Chihaya. Shizuru disappeared only because of slipping on blood after effortlessly killing countless familiars, and Chihaya gets bitten a few moments later. Now there are only two people left – Kotarou and real Sakuya, who appeared along the way. It is revealed that this is the end of Sakuya’s journey – no matter what branch his life follows, he will always end up in the dream world. Because of that, this is his final battle. He will never appear again. He uses his last powers to drive off familiars, and gets killed. Kotarou tries desperately to protect Kagari who has taken on the form of a tree, but gets torn into pieces. Fortunately that happens after the true Salvation starts. 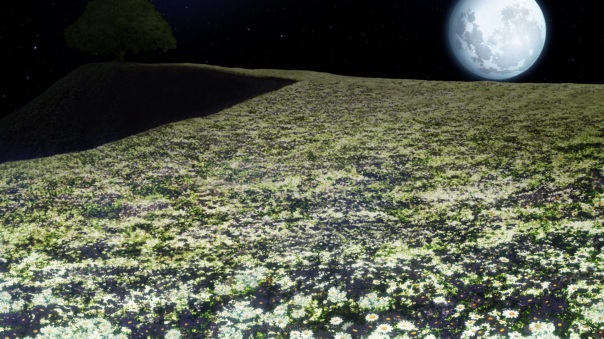 It is now revealed that the “dream world” is actually Moon, as the route name suggests. Kagari is the single life form that Moon’s aurora (life force) can sustain, and her mission is to help Moon’s twin – the Earth. Some confusing stuff. Kagari expresses sadness about breaking up with Kotarou and sends him on his way to Earth as aurora. Not sure what happened here – maybe Moon is giving its last life force to the Earth to save it from destruction.

I also didn’t understand the part about Kotarou being in a coma for a few years after Kagari almost killed him in the forest. Was he supposed to be older than the other club members, but didn’t age while in the coma because he was a half-familiar? Did he age after waking up? Was he eternally young…? How did Kashima Sakura send familiars to the Moon? What were the club members and Yoshino that were on the Moon? What even is Kotarou, if he could create people who he had deep ties with and could create familiars as strong as Sakuya? Might find out the answers to those in the next (and last) route, Terra, but I somehow think I just missed something in Moon route. Or I shouldn’t overcomplicate things and accept the story as it is. Which I will.