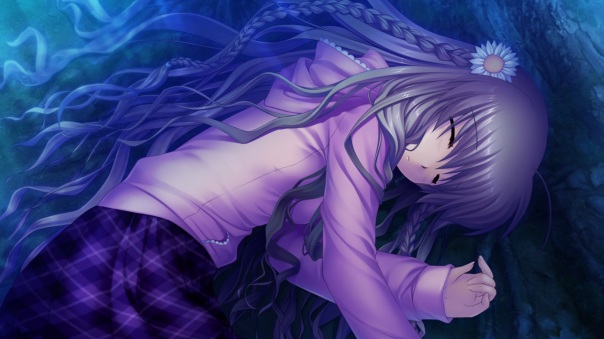 Little Busters! really did impress me a lot. I will probably never be able to forget those emotions, unfortunately. Humans can’t just wish to forget something, after all. That’s why I have been searching for something similar to it. In August, I decided that Rewrite’s time has come. I put Fate/stay night on hold, and picked this one up.

It definitely isn’t what I expected it to be. I always remembered Key’s novels to be about normal people, after all. In Rewrite, the protagonist has superpowers. He can change his body as he wishes, but he can’t rewind the changes. For that reason, Kotarou Tennouji refrains from using the power. When he does use it, it’s only in the most critical situations. And it gives him a feeling of getting closer to a line of no return. This claim is supported by a circle in the bottom left corner of the screen. In it, the hand of a clock unforgivably moves closer to a full turn every time Kotarou’s body is “rewritten”, giving a sense of impending doom.

Kotarou lives a normal life. He can talk with everybody, but does not have many close friends. It’s just his childhood friend Kotori Kanbe who often skips school, and Haruhiko Yoshino, who hates him with a passion. One day, Kotarou decides he wants more friends, and adventures bring together his new club. Members gather and finally there’s 6 members in the Occult Club: Kotarou, Kotori, Akame, Chihaya, Shizuru and Lucia. As expected, Kotarou is the only boy, and his attempts to get Yoshino to join fail. With his newfound circle of friends, our main character investigates rumours, myths and legends surrounding the town they live in – Kazamatsuri. 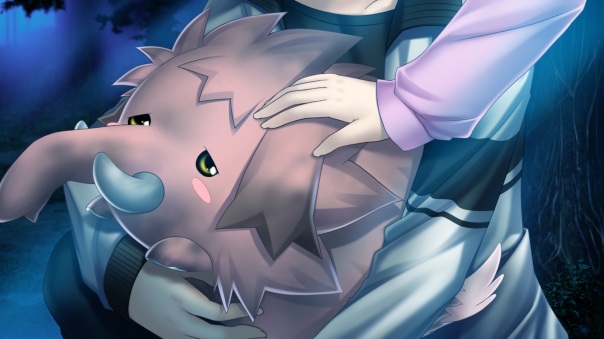 Seemingly a normal story. That’s what I thought. In reality, the forest that surrounds Kazamatsuri is filled with mysterious creatures (UMAs) and Kotarou constantly finds himself in endless loops of streets, corridors and other locations. For most of the story, he completely disregards those. Until one fateful day…

On that day, the club members were out to find Inoue, a girl who got lost in the forest a few days ago. Suddenly, they were all separated, and chased by evil black dogs. When they finally meet up, they are attacked by a dragon who looks like a plant. While protecting Kotori, Kotarou get’s injured and finally loses consciousness. When he comes to, he’s back in town, and none of his friends is there. He’s all alone. The club is disbanded, and there’s just one notice for him from the president of the club, Akame – telling him to act normally and his usual days would eventually return.

Easier said than done. Kotarou gets depressed and finally goes back into the forest, where he once again loses consciousness, but this time is brought back by Kotori. When she disappears again a few days later, he decides to find her in the forest, and a secret is revealed. Kotori is not a normal girl. She’s actually a druid, protecting the forest and keeping an eye on the “Key”, a mysterious girl said to bring salvation to the Earth. Her job isn’t easy, and she occasionally breaks down. There are several organizations hunting for the “Key” after all. For her protection she is creating familiars. Small ones, of course, because she’s not that skilled or knowledgeable. She’s just a lonely girl whose personal life was taken away in a car accident many years ago. She now has to serve as the druid of the forest, even if she would like to quit.

Soon, Kotori, Kotarou and the Key are forced to leave the sanctuary created by Kotori, and they flee from people using supernatural abilities. At the most unexpected moment, Key is killed, and the killer is none other that Shizuru – one of the Occult Club members. Her job finished, she leaves Kotarou and Kotori suffering from the aftermath. It is revealed that when Kotarou was small, he fell from a tree and Kotori had to save him with Key’s help. How the energy is gone, and all his wounds open up. His superpowers are also gone, so he’s left to rely on normal humans for help. Miraculously, he survives, and it is implied that he will now live his life normally with Kotori who also lost her druidic powers. 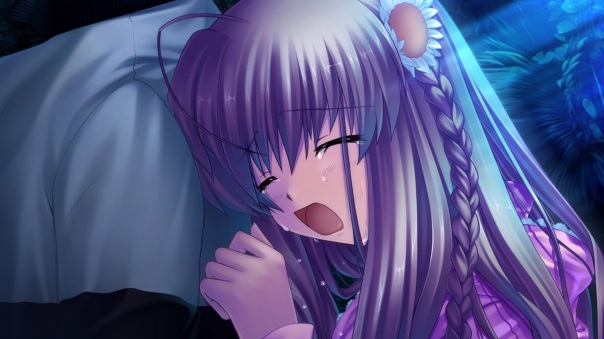 The story is confusing and bizarre, but it is good. At first I thought “Superpowers? How can this be sad?” I was wrong. Key studio really excels at making people feel for the characters. Especially touching was the death of Kotori’s best familiar, Chibimoth, who was made from her old dog. Right before breathing his last breath, he starts barking like that dog, even though he should be a mammoth now. A real tear-jerker for me.

On the other hand, Rewrite also has extremely good comedy. Better than in any other visual novel that I’ve played. There are references, and the game often makes fun of the main character in a good way. I really enjoyed those moments. The visuals are pretty good compared to other Key works, which is probably explained by the later release date than the others. Some of the OSTs were a bit out of place, but most were good for the situations. Especially some of the later ones that once again made the already sad story even sadder. Finally, the game has a “map” feature, which I loved at first. It gave some variety and freedom of exploration. As the game went on, it turned into a chore if you wanted to read all the dialogues. And I of course tried to do exactly that.

The whole concept of environment protection and being close to nature, which is a central theme in Rewrite, is quite interesting. On one hand it gives a unique and fascinating universe for a story to take place in, and on the other hand it educates the player. It also encourages the player to think about some things. For example it made me accept that nature isn’t the way humans portray it. It is not kind. It is unforgiving and ready to kill anybody who steps into it. That’s just how nature lives – through death.

In conclusion, I would like to mention that I will be playing (or at least trying to) in the playing order that I found to be recommended on the Internet: Kotori -> Chihaya -> Shizuru -> Lucia -> Akane. I’ve managed to avoid the majority of spoilers, which is a giant achievement for me, considering how easily I spoil myself. A few pictures couldn’t be unseen, though. Overall – Rewrite is good so far, and I’m planning to finish it before going back to Fate/stay night.