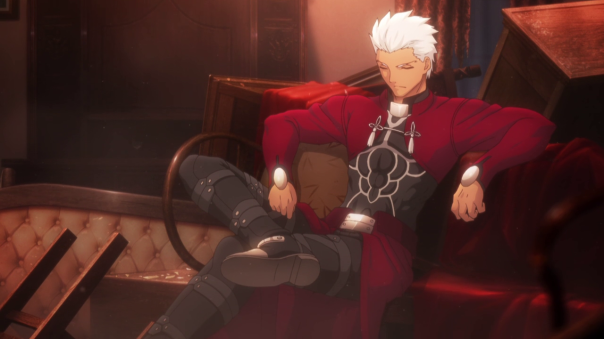 With Fate/stay night, I made my first venture into Type-Moon anime. Because I’ve been playing the visual novel of Fate/stay night for a year now, I’ve also made sure to avoid anything related to series like Fate/Zero and Fate/kaleid. I even planned to see the original anime adaptation of the visual novel after finishing the game. As it took me longer than I expected – here I am, watching the remake instead of the controversial first adaptation.

OP: Although it was shown as the ending in the first episode (also known as episode 0, or Prologue), it will actually be the opening song of the full anime. The singer (Mashiro Ayano) is a new voice to me, so I had no idea what to expect. What I heard was okay. Nothing big or impactful, but still not bad. No animation for now. 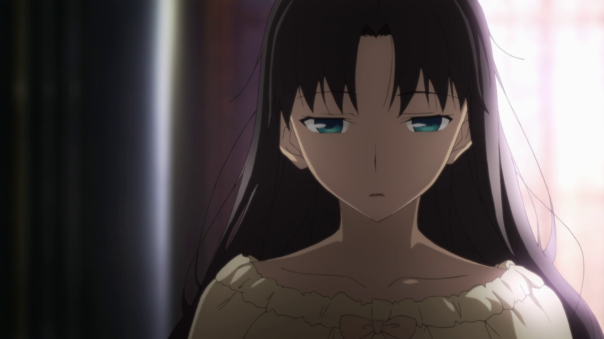 Voice acting + sound: First of all, I loved the voice acting. Precisely because it was kept the same as in the 10-year-old visual novel. Rin, Shirou, Archer, Lancer, Kirei – they all sound great in their roles. The sound effects were even better than I expected with all he hype surrounding the remake! The sounds during the fighting sequences were simply eargasmic. I immediately fell in love with this anime. The OSTs were also amazing. I don’t remember anything like that even from the visual novel, which by itself was ver good. This, however… I’m in awe.

Visuals: When the episode just started, I was a bit disappointed with the art style. I expected everything to be very sharp, but instead it felt kind of smudged. As I watched for a few minutes, I realized how wrong I was in my judgement – even the art is exceptional in Fate/stay night: Unlimited Blade Works. Animation is smooth. Backgrounds are detailed. Filters are used very well to convey the atmosphere. And the battles with all those visual effects…! I’ll even go as far as to call it faultless. In my eyes, at least. As pointed out on the Internet, ufotable also made sure to make Rin’s clothes cling to her rear curves. Not that I have a problem with it or anything. 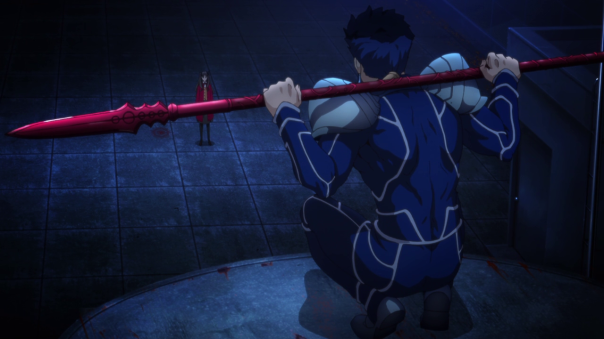 Characters and story: I’ve actually already finished the Unlimited Blade Works route in the visual novel. I found it much better than the Fate route, which was shown in the original anime adaptation of Fate/stay night. That’s why I have great expectations for the anime. A few words about the characters shown so far. Rin Tohsaka is the main character of the prologue. She’s a magician who has been training for many years just to participate int he Holy Grail War, which is the main theme of the anime. She gets her chance and summons a servant – a very strong familiar in the form of a historical or fictional hero – to fight for her. She hoped to summon Saber, the strongest servant class, but instead she gets Archer. They are very much alike. Both are independent and arrogant, but loyal at the same time. Although they can’t get along at first, they quickly strengthen the bond between each other. A strong magician with a natural talent for magic, and a mysterious heroic spirit who does not remember his name or past.

On the other hand, we are briefly shown Shirou Emiya, the real protagonist of the Fate/stay night story. He’s always ready to help out his friends, and yet meets a sad and at the hands of another servant, Lancer. He accidentally saw the battle between Archer and Lancer, a battle between servants, who are no match for even the strongest humans or magicians. For that reason, he’s impale by Lancer’s lance and left to die in the middle of a dark school corridor. Luckily for him, Rin gets there just in time to sacrifice her father’s last and strongest relic left for her. Using the magic stored in it, Rin saves Shirou’s life. We still don’t know who Lancer’s master is, or who set up a deadly trap at school. We only know that Lancer is after Shirou’s life again, and that a third servant appeared at the boy’s house – Saber.

Conclusion: This is the best anime I have seen in a veeeery long time. I don’t actually remember the last time I enjoyed an anime so much. Maybe because I’ve always wanted to see an adaptation of the visual novel, but was hesitant to watch the one that was out there? Who knows. What I do know, is that so far the anime has all the potential it needs to live up to all the hype. I rally hope ufotable won’t disappoint me. That’s why for the first time on this blog, I will give something the deserved maximum score.