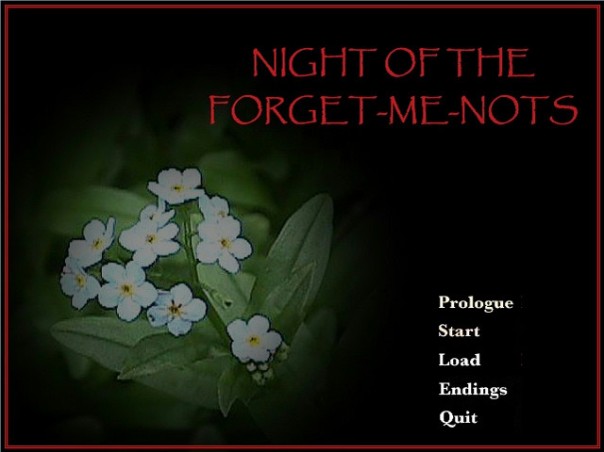 The name of the visual novel is Night of the Forget-Me-Nots (or Wasurenagusa no Yoru in Japanese). My first thought was – a mysterious name, promising to tell a creepy story. Next, I looked the visual novel up on visual novel database (vndb.org), and saw that it was in the “short” length category (2-10 hours). Fair enough. I already had a long game on my hands, so I was more inclined to choose a short one. So I did.

Firstly, I’d like to mention that I came into Night of Forget-Me-Nots without any big expectations. In reality, as a non-native English speaker I didn’t even know what the word Forget-Me-Not meant (hence I thought it would be a creepy story about unforgettable things at night). Without many expectations it was easier to let the very beginning of the visual novel slide. Even though it really bothered me. That was for just a bit, though.

Soon enough, the actual story started. A girl went on a trip to the mountains with their club, and along the way, she realized nobody was walking behind her. Or in front of her. Just one boy, a year younger than her, who finally catches up to her. Together they decide to move towards their destination – an abandoned school in the middle of the forest. There they would hope to catch up with the rest of the club and the teacher. Little did they know of the horrors that awaited them. Not the reader, though.

Yes, the creepiness of the game was completely destroyed for me with the unsuitable soundtracks during moments of suspense. Instead of playing something scary, the game made the situation seem like a battle in a shōnen anime. What a pity, but oh well. At least one of the 16 endings had creepy vibes to it thanks to a surprisingly fitting music. The others were… meh. A few things went unexplained (like what happened in the first bad end), and the true ending was pretty forgettable. Also – no, it was not 10 hours long. Not even 2. Maybe if I had restarted it from the very beginning to get every ending, I would reach those times, but nothing changes in the “common route”, so I find it pointless. Some almost identical situations resulted in different bad ends.

What I did like, was the use of photographic backgrounds. There were no sprites, and to be honest, that was for the best. The photos of the forest and the school scenery were atmospheric. The characters were interesting, but weren’t developed enough. If you ever decide to give this visual novel a go – I advise you to not get your hopes up. It really isn’t anything special. In all honesty, it wasn’t even mediocre. Maybe because my previous experience with visual novels (Saya no Uta, Little Busters!, Fate/Stay Night, even Katawa Shoujo was better) set my standards too high for this, but that’s how it is.

Posted on September 3, 2014, in Night of the Forget-Me-Nots, Visual Novels and tagged night of the forget-me-nots, review, visual novel, wasurenagusa no yoru. Bookmark the permalink. 1 Comment.