After almost certainly deciding to stop further blogging about anime, I stumbled upon a series that brought me back here. I had very high hopes for Spring 2013, and especially towards Aku no Hana based on its synopsis. However, even before I got to see the first episode, I read some opinions from those who had already seen it. Of course, I disregarded all the hate, thinking that I don’t care that much about the art if story is good. Aku no Hana is something special though…

I would like to start with what I had the biggest problem with – the art. Yes, despite my initial thoughts about series with bad art, I still found it extremely difficult to watch this anime. The backgrounds and sceneries were artistic and beautiful, but at the same frames were continuously repeated throughout the episode. At the same time, the character design surprised me alot. With art like this, I expected to see similar characters. The situation was opposite – viewers were shown some random shapeless blobs. Apart from exaggerated facial features like the gums and pimples (assuming the black dots WERE pimples), the clothing and everything else lacked any sort of details. As characters moved closer, some details like their mouths appeared, but those should’ve been there to begin with!

The animation was also bad. Especially the frame-rate. It seemed like I was watching a fast-forwarded slideshow. Plus, as I mentioned, there were parts that were simply repeated as if to prolong the episode. Some of the character movements seemed strange, perhaps even unnatural due to the once again strange body shapes. Maybe the studio tried giving the anime a “realistic” feeling, as some people are speculating, but in my opinions this was NOT realistic in any sense. If I was to compare Aku no Hana to something I’ve seen in the past, Serail Experiments Lain would be the most accurate anime. From 1998.

One of the few positives was the atmosphere. A dull world with some darker moments is something to look forward to in this season. This will probably turn into a more serious anime of the season. The synopsis is hinting towards this too. There probably won’t be a mystery, and everything will continue to progress slowly, gradually changing the dull world of the main character into something more interesting.

I’m not sure whether the voice acting was good or not. The voices in the background sounded great, and were done well. The more important roles, such as Takao Kasuga’s friends, sounded unnatural and forced. Their conversations lacked the flow, and it seemes as if they were all bored, tired of their dull lives. Even the jokes and teasing did not fit the context. Ken Kojima (one of the friends) honestly sounded like a huge pervert with an annoying voice. 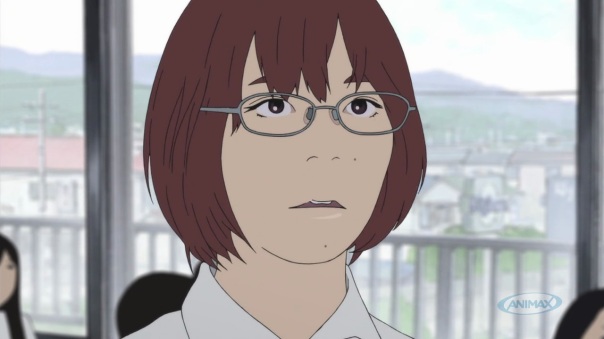 A small overview of the story, based on the synopsis and the first episode: Takao Kasuga is a typical high-school boy (how “original”) of the modern era. He has a few friends, a crush (Nanako Saeki), and a pashion towards reading. His grades seem to be quite average, if not a bit worse. However, the worst in the class is still another girl – Sawa Nakamura. She is arrogant and scares everybody around her with her looks. One day, Kasuga forgets his book in the classroom, and upon returning in the evening, he also finds Saeki’s gym uniform. He steals it, not knowing about the consequences that would follow him thereafter. This is the thing that got my hopes so high before the season’s start.

The song played during the opening was okay – another positive side of the anime. Toobad it was worsened by the lack of any animation. Instead, we were shown a few slides with textboxes, and some scenery frames from the episode itself. Ending was a whole another thing. The scroll-credits on a black background were accompanied by something I’ve never before heard in anime. It was a song-like thing, done by an automated computer voice similar to the on in early versions of Google Translate. It lacked a tone and was painful for me to hear. Nothing else needs to be said. The preview didn’t show parts of the next episode, but instead told some parts of character conversations. That was okay, and it’s used quite often in other series.

My overall first impression of Aku no Hana was bad. I take my words back about art being one of the lesser qualities that I value in an anime – it appears to affect me alot. Now that I think about it, the reason I avoid most pre-2005 series is due to the style. I would never have expected a 2013 anime to be no different from 2000 or earlier. The only thing that could keep me watching this is the potential of the story – if things won’t improve in the next 1-2 episodes, I might be dropping it.