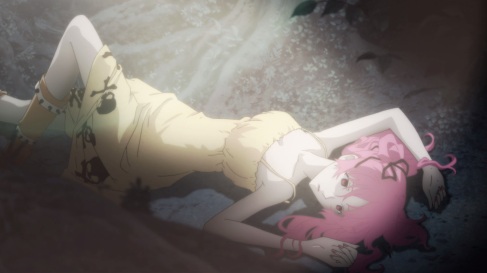 I once already tried watching Shiki, but didn’t get past the first minute or two. The atmosphere really did not seem to fit the genre. Now I understand how wrong I was. Shiki seems to be very promising in terms of the storyline, despite me already knowing the ending.

So, a while back I learned how everything will end, and even saw a spoilerish video, but I still decided to give Shiki another go. I don’t think I will be disappointed in this decision – in the worst case, it will give me motivation to actually write about something in this blog after a ~3 week pause. What was the first impression I got from the series?

As I mentioned before, the initial atmosphere is very different from what you’d expect from a horror/thriller/mystery anime like Higurashi. Everything starts out with very positive people, on a hot sunny day, in a happy village. Nothing is out of place there. Except for one European-style castle that was built recently among all the Japanese houses. This particular castle will probably be one of the core points of Shiki – mysterious and captivating at the same time.

A girl, Megumi Shimizu, who lives in the village thinks everybody else is strange. They aren’t embarrassed to wear T-shirts and slippers outside and laugh at her for changing her clothes while going for an errand. Typical rural village, I must say. However, this one girl hates it really much. She does not fit there – her dream is to move into a big city as soon as possible, in order to be closer to the “civilised world”. 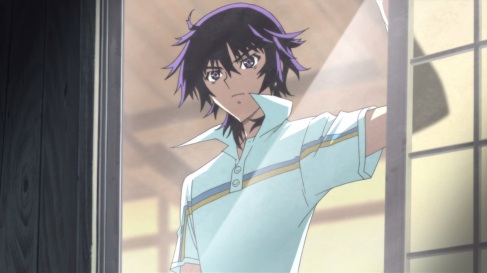 Despite her dislike of the village and people living there, there are two things she still loves: the European castle on the hill, and a boy called Natsuno Yuuki, who she clearly has a crush on. It isn’t said directly, whether Yuuki knows about her interest in him, but he doesn’t even try to hide his own disinterest or even dislike of Megumi. His usual attitude towards her is ignoring her and closing his window when she’s hiding in the bushes close to Yuuki’s house, stalking him.

However, it is soon revealed that despite the build-up of the first episode, Megumi is not the main character of the series. Apparently, new people move into the village – to live in the newly-built castle. They act strangely, waking some villagers up with their car horn at 2 am in order to ask for directions. Apologizing, the expensive cars and a truck go in the right direction. Rumours start spreading immediately (not bad ones – just the usual village-rumours). 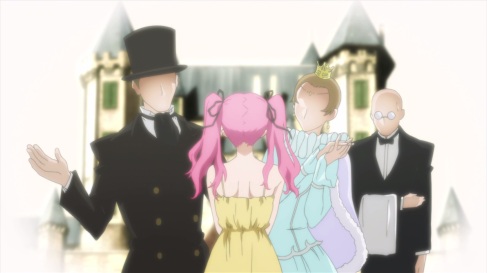 Next day, Megumi hears these talks about the new villagers. She gets excited and wants to introduce herself – perhaps they would like her and she’d get her portion of civilisation in the village. She goes up to the castle, and lets her imagination create some pleasant scenarios. Suddenly, she feels as if somebody is watching her. She takes the chance and acts like a lady (or at least tries) – and gets even more excited when the door opens, revealing a figure in the bright light.

Next thing we know, it is evening. Megumi’s family is worried – their daughter still hasn’t returned home. They notify other villagers and everybody starts looking for the girl. After a long search, a man notices her – lying on the ground, in the forest. At first glance she’s dead. It is revealed a bit later by the doctor, though, that she simply has an anemia, low blood pressure and quick heart rate. Megumi herself looks really pale, her eyes don’t have the usual anime-shine, and her lips are very dry.

She says she is sleepy. This, for some reason, surprises the doctor, but he says nothing. A bit later, Megumi’s friend visits and tells her about meeting the woman living in the castle – she says that the woman is very beautiful, and looks almost like an actress. Megumi weakly confirms this. She closes her eyes and abstract images of people are shown – the lady of the castle is also one of these images, with her eyes completely black and a smile on her face. Some time later Megumi is announced dead. 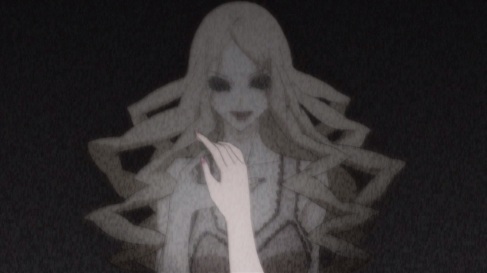 Keeping in mind that Shiki was airing in the second half of 2010, the visual quality is quite good. At some points it is too simplistic, lacking detail, but generally it is watchable and even enjoyable. The use of lighning is done well, and contributes a lot to the atmosphere of the village. About animation – it was okay, even though there were plenty of still frames.

As I said before, despite knowing the ending, the story managed to capture my interest. It makes me want to watch on and find out how the mystery will evolve – what the characters will have to go through. After-all, Megumi wasn’t the only dead person – a few days earlier, three other people were found dead, but they were elderly and had passed away long ago based on the state of their corpses.

Besides, I took up Shiki in the first place because I have trouble finding something deeper to watch – anything besides story-driven plots has been driving me away from anime in the recent weeks. This, however, is clearly a generally well-received mystery anime (based on the average score, at least). It being 22 episodes long makes things even better – the anime won’t end too fast and therefore would not need to be rushed, as is the case with many other promising works. 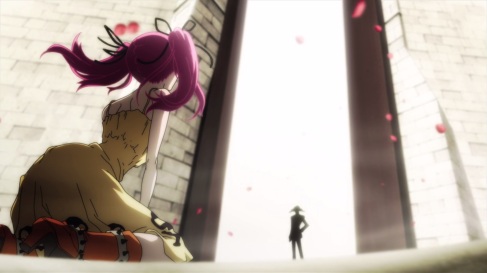 Finally, it is worth really worth mentioning the sound in Shiki. I don’t have anything in particular to praise the opening song for – it’s just not my type of music and voice. However, the foreshadowing in the opening is done well – not revealing too much, but giving a hint what will happen very soon. The ending song is fine, but once again – simply not my type. It fits the overall atmosphere of the anime, though.

What really caught my interest in terms of sound were the OSTs. The music that was used really contributed to everything else – fitting every scene where it was used. When a mysterious event took place, respective classical music was used to generate an even more thrilling feeling. This is something where many series fail to achieve their purpose – using something that simply does not fit the context.