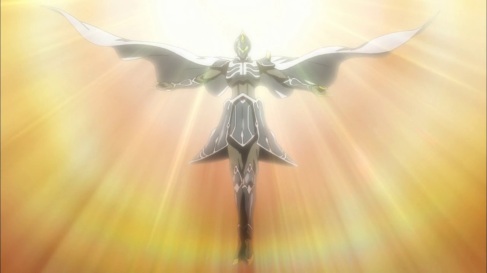 I wonder if the similarity of Zetsuen no Tempest to Shakespeare’s works is due to the anime being intentionally based on them, or perhaps there is a deeper connection to The Tempest and Hamlet within the story itself? If that is the case, the anime is doing a great job at creating mysteries around every corner!

In episode 16 of Zetsuen no Tempest, the action is mainly focused on the Kusaribe village – a location where only mages live. That’s also where the princess is from. Yoshino and Hakaze received some information about a spy that infiltrated the village to prove the existence of magic to the outside world – and the two intend to find out who it is and stop them without giving away any evidence.

Meanwhile, Samon and the rest of the people around him are executing their own plan – shwoing the existence of the Mage of Exodus to normal people. They choose a branch of Tree of Genesis on a small piece of land in the middle of a lake, so it would be inaccessible to everybody except the mages, and use Megumu’s powers to exterminate it. As expected, the whole event is broadcasted through the media, and all people get to see the first appearance of the Mage of Exodus in a suit and helmet that hid his face. Everybody was surprised.

After doing as told, Megumu went on to relax and get some rest. At the same time, one of the girls at the Kusaribe village – somebody Hakaze knew quite well before – disappeared. There was a rumour about a ghost appearing near the shrine, so the girl probably went there to see her dead brother’s spirit. Instead, however, she is captured by the spy (an official-looking man in black suit) who sets the shrine on fire after cutting the suspension bridge. Now there was no normal way to get to the two. 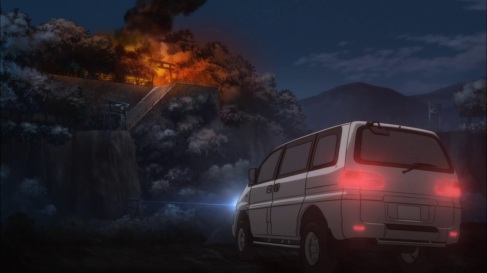 The spy’s actions did not leave many choices – either let the shrine burn down together with the hostage girl, or use magic, which would most likely be filmed on hidden cameras in the surrounding area. Since every other villager was either a small kid or an old man/woman, Yoshino was the only one who could do something without breaking Hakaze’s temporary rule of not using magic. He used a rope to get to the other side of the river and saved the girl. However, he got assaulted now

As the spy was about to shoot Yoshino with a gun, the shrine started collapsing upon them. Both would have died, but Hakaze could not hold back anymore – she used her magic to blow away everything around the shrine, extinguishing the flame and saving Yoshino. The spy had achieved his goal and started running away, just to be greeted by Tetsuma, Natsumura and Evangelie, who had been observing from afar – with the intention to see whther Yoshino was the Mage of Exodus or not.

Since Yoshino didn’t use any magic and went through several very dangerous situations, Evangelie was relieved that Yoshino wasn’t Mage of Exodus. Tetsuma, however, had a different idea. In his opinion Yoshino didn’t actually have to use magic himself – instead he made Hakaze do it for himself. His influence over Hakaze was supported by how the princess started doing illogical things – something the Tree of Genesis would not do. Quite far-fethed theory, but why not?

Other than the above mentioned events, the episode was filled with Hakaze feeling awkward arounf Yoshino. Because she now knew her feelings towards the boy, she was overthinking every normal thing, such as helping him go over the suspension bridge. Even the main reason for going back to the Kusaribe village was to relax a bit.

Some flashbacks from Yoshino’s and Aika’s summer festival date were shown. Aika appeared just like always – talking in riddles, bringing out quotes from Hamlet, making sharp remarks about Yoshino’s personality. She also mentioned ghosts, asking Yoshino whther he would believe in ghosts if he saw hers. 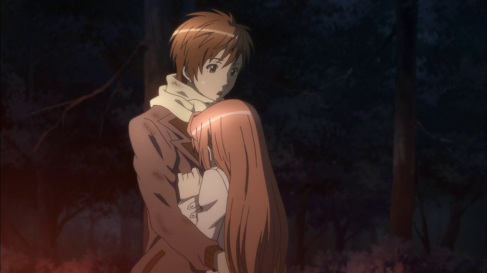 Every time there is some mention about Aika, it makes it seem like if she knew everything that would happen. Her brother and lover mourning over her death, just like in Hamlet; a wizard living on a deserted island. She even keeps talking about things like fireworks being sad – bloomid for a few moments and disappearing again.

Desregarding my theory of the story in the previous episode’s review, it could be possible that Aika really knew her fate. She could’ve been the direct creation of the Tree of Genesis, just to set up the story for Hakaze. If Hakaze didn’t exist, she wouldn’t have become Mahiro’s sister. If that was the case, the two friends wouldn’t mourn her death and would have no intention of saving Hakaze from the island. Everything fits. But still, there are way too many theories and possibilities how the story could continue/end up.