New episode, new revelations, new questions and new adventures! Just like always. Episode 3 of Zetsuen no Tempest was for the most part concentrated on the fight between the two friends and the mage with a spear.

First of all, Yoshino and Mahiro met up, and since they were together now, had to also escape together. The mage was simply too strong for Mahiro. This resulted in him losing all of his rings (talismans), and therefore taking physical damage. However, in the end Yoshino though of a plan, and the two managed to escape with the last bits of magical power and through very lucky circumstances. The city is quarantined by blowing up all the bridges, and nothing should get in or out anymore.

As for revelations, just like I though – the murderer of Aika is from the Kusaribe mage clan. This seemed as a strange coincidence for Yoshino. I actually have my own theory of who the killer could be, but for now I’ll keep it to myself.

The story (or the background) was also explained more in this episode. The magical power that is used is actually defensive magic, since there’s no offensive magic in the Kusaribe clan. However, the defensive barriers are strong enough to kill people, and the fights will only last for as long as these barriers stay up – the one that is a stronger mage will win. The magic cannot be used in defiance of logic – so resurrection of the dead is impossible.

The power of the magic comes from the Tree of Genesis, which for some reaon accepts human technology as sacrifice. The more complex the technology is, the stronger magical powers will the tree grant to the mage. This, together with people turning into metal, raised even more suspicion in Yoshino. It also explains why the strongest mage in the world has no option but to sit and wait on an uninhabited island – there’s no technology anywhere near, and therefore no magical powers either. 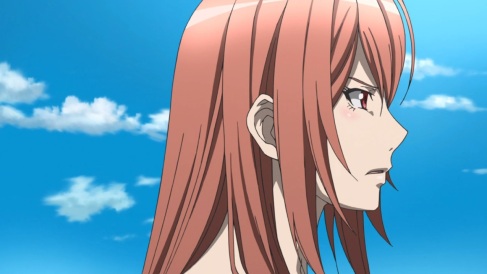 Although much was revealed, nothing really happened in this episode. I generally like fights like this in anime, but here it dragged for just too long. On the other hand, this helped Yoshino learn more about the world of mages, and strenghten his resolve to help his friend Mahiro. I have a feeling, and so did Hakaze, that Yoshino is much stronger than he seems – he might even become a great mage at some point.

I will give this episode a 7.5 out of 10, because it honestly could have been better. The action scenes were too long, and an anime with such a deep story would benefit more from the development of story, rather than wasting a whole episode on Mahiro getting beat up. It was revealed that the bad guys didn’t even actually care whether the two died or not.