Finally decided to start catching up on this season’s anime, and looked through the list of ongoing series. One of these was K, which I remember getting interested in already at the end of summer. However, as time went on, I forgot it (just like many other series). Today I watched the first episode, and want to share my first impression.

The episode started out with a opening-like sequence, which I disliked. It really made me consider for a moment, whether this is even worth watching. Later, though, I found out that it wasn’t really the opening – and the real thing came only in the middle of the episode. Opinion on the opening – it was okay. I didn’t especially like the song, but it wasn’t repulsive. The shown fragments gave a good preview of the serie, and I liked that. 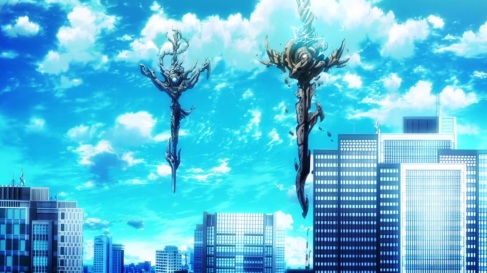 The beginning of the episode had some action, which was also good. I don’t generally enjoy the modern-day action in anime, but this was good. Later, the mood made a 180 degree turn, and the atmosphere became very relaxing. The protagonist of the series was introduced, and for half of the episode he was just walking around the school, doing nothing. This showed what his personality is – calm, and likes the peaceful days in his life. He was also later shown as somebody who dislikes violence (it seemed so to me), and acted rather weak. He even needed another guy to protect him (sigh, BL fanservice). Generally, though, the story seemed to develop well, and made me want to continue watching this anime.

Now, what I especially liked about K (or Project K, as it’s often called, to make the name searchable on the Internet) – animation and style! Wow, if I had to compare the quality of the animation, I’d bring out Guilty Crown (despite people disliking it very much, its animation quality can’t be denied). This might even be better, but not sure. Everything seemed just so smooth and detailed… Same goes for the character details – the faces were drawn well, and all facial expressions were well-developed. This really is something I admit about this anime. Style is good in a sense – despite the fact that I disliked the colour choise a bit, it was still enjoyable to watch. Mainly, though, the style was original, and that is the most important thing nowadays, if you want an anime to stand out.

There were plenty of familiar voice actors to me here, and that was good. All voices seemed to suit the characters, and had quality – none of the unappealing sounds that many other anime might have.

Summing everything up, I’m actually not sure what to give this. On one hand, I seemed to like everything. On the other hand, however, there’s something bothering me, and I can’t pinpoint it. Therefore I will give this 7/10. Perhaps as the series go on, and I will definitely continue watching, my score will rise. But for now, I’ll leave it at that. A good first episode, in general!